Improving Nutrition and Brand Awareness In Lower-Income Neighborhoods of Color

In 2015, more than 39 million people — 12 percent of the country — lived in areas where finding affordable and nutritious food was difficult, according to the United States Department of Agriculture Economic Research Service.

The USDA’s findings also showed that the issue of food insecurity is a racial one. Black and Hispanic households are twice as likely to be food insecure than white ones, particularly within metropolitan areas. For instance, according to The Chicago Reporter, Black people are just one-third of Chicago’s population, but make up 80% of residents in regions with low or volatile food access, otherwise known as food deserts.

The absence of nutritious foods in lower-income neighborhoods of color, paired with a lack of nutritional literacy, is linked to adverse health conditions like obesity, diabetes and other chronic diseases in adults and children.

What can health and wellness brands do to improve nutrition, help fight these ailments, and potentially grow their brand awareness within these communities?

There are a number of nuanced approaches brands can take toward breaking down some of the long-standing accessibility, economic, and cultural barriers that allow poor nutrition to affect these communities.

First, it’s important to understand the context around why nutritious foods are so scarce in low-income neighborhoods. When “white flight”—in which white people left increasingly diverse metropolitan areas for the homogeneity of the suburbs—took place during the 1950s and 60s, grocery stores followed. Grocers disinvested from urban centers and left the remaining residents, largely people of color, with few options for buying fresh foods easily.

Food deserts grew in number across the country over the following decades. The food retailers that did stay were often fast food restaurants or businesses like convenience stores, discount stores, and delis that primarily sell processed, largely unhealthy foods high in fat, sugar, and salt. Of the retailers that do provide fresh foods, the quality and selection are often poor, and prices can be higher than they are in the suburbs.

Shopping at stores that do provide nutritious foods is often a challenge for people who live in food deserts. They are generally lower-income, and may not have cars to drive to grocery stores, so they have to make long trips on public transportation. A limited grocery budget can also sway low-income shoppers toward more affordable, more processed foods. Another issue is that some work multiple jobs. Their shift times may prevent them from shopping during normal hours, so they have to rely on all-hours convenience stores.

The trend for grocers to systematically ignore low-income areas which started decades ago persists today. According to a report from the Associated Press, 75 of the nation’s top food retailers opened almost 11,000 new locations between 2011 and 2015. But when AP filtered out discount and convenience stores, food deserts nationwide got less than 300 new grocery locations.

Stereotypes about spending habits (or power) and the economics of supply and demand play a significant role in grocers’ continuing to avoid these areas. 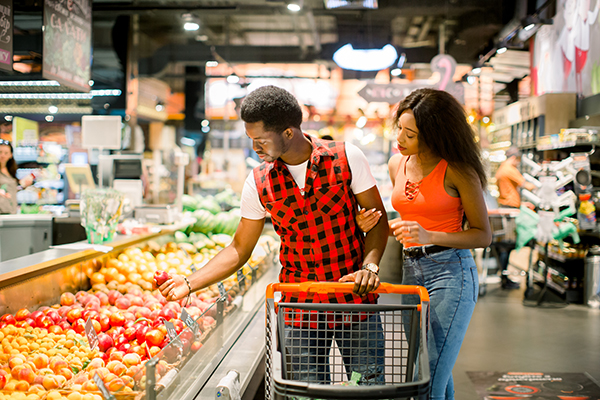 The importance of education

Improving access to nutritious foods is an essential part of curbing the adverse health effects of poor diets in food deserts. However, simply having more accessible fresh foods may not lead directly to healthier eating, as some studies have shown. For these efforts to be effective, they must be paired with education around good nutrition and better eating habits.

While the basics of nutrition are taught in some schools, Gale said those curricula are not nearly as widespread or comprehensive as they should be. Nutritional literacy—knowing the importance of fiber or how detrimental excess sugar can be, for instance—can help build habits that lead to a better diet, like checking nutrition labels or eating certain foods in moderation.

Many dietary habits are developed at a young age, sometimes passed between generations through cultural culinary traditions. Parents who aren’t aware of the importance of nutrition may struggle to impart that wisdom to their children.

“If you were raised in a situation where you didn’t have nutritious foods, you can develop tastes associated with unhealthy foods. Then you might develop habits that preclude you from seeking out more nutritious foods,” Gale said. “This situation happens with both wealthy and poor individuals. It’s sometimes hard to break those cultural attitudes, so those tastes and patterns persist into adulthood.”

Although there are many nuances that make it tough for poorer populations of color to maintain healthy eating habits, there are also many opportunities for brands to help. Gale said it’s vital that brands build goodwill for themselves within these communities, rather than helping from a distance. A good place to start? Seek out local residents who are dedicated to the cause of better nutrition, and ask them to be health ambassadors.

“There are people in these communities who are already eating well because they know about nutrition and how important it is,” Gale said. “They’re passionate about the topic and they want to make a difference. So finding and enabling those people to educate their community is where you start. From there, it builds and builds and creates an internal movement that can start to shift the paradigm in favor of improved nutrition.”

With support from health ambassadors, brands can get creative about the best ways to lend assistance, based on the real needs of the residents. But no matter what tactic you use, brands should be conscious of the cultures they’re appealing to.

Here are a few examples of strategies brands can take:

Organically appealing to the plights and palates of these communities can help rewrite the narrative of poor eating habits that lead to dangerous health conditions. Companies can improve their brand awareness in a new market in the process.

“There are a lot of opportunities for companies to make a big difference, and help themselves from a marketing perspective at the same time,” Gale said. “The dollars they put into building their brand in those communities can more than pay for themselves over time as people embrace a product they wouldn’t have been exposed to otherwise.”

How Food and Beverage Brands Handle Choice, Change and Amazon