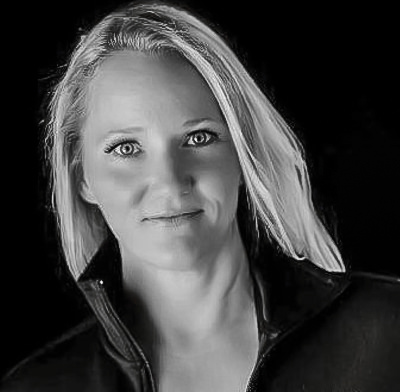 Michele grew up fascinated with photography, starting with a photograph taken by her father, Jerry Dobbs, on a plane as it flew from Los Angeles to Denver. It was a profile shot, backlit by the tiny airplane window and the soft golden-hour light. This image sparked a life-long fascination with lighting, subject, imagery, composition, and emotional engagement. From then on, Michele loved being behind the camera, whether it was her dad’s Olympus, a Polaroid, or, later, a Kodak 110 camera. She has had a love affair with black and white photography ever since.

Since 2016, Michele’s work has focused on people. In the advertising and commercial world, Michele uses an easy, relaxed approach to engage the model and the environment—she’s very much at home with communicating an emotion and telling a story without speaking a word.

Michele’s work has captured everything from scenes in an ethereal NYC skyline penthouse with modern women in feminine, flowing gowns, and delicately placed jewelry to a retro chic, contemporary “rat pack” style that highlighted and personalized the rebranding of a community landmark.

Michele’s customers include runway fashion shows in New York, London and Paris Fashion; a two-day shoot with 15 teen/tween/child models for a Traumatic Brain Injury campaign; styling and photographing authors for their book covers, a campaign for a state elected official’s public speaking image refresh, fashion editorial shoots in London and New York; staging and photographing several models for a high-end custom jewelry designer, and, most recently, a rebranded bowling alley advertising campaign for Rancho Bowl in Santa Maria, California. On that project, Michele scouted the models, composed the set and lighting design, and staged the shoot as well as doing the photography. For Michele and the clients she works with, the storytelling comes in different forms and visions, but always creates a connection between the subject and the viewer.

Download our concise PDF and discover key career advancing strategies distilled from dozens of seasoned marketing executives’ in the health and wellness industry.